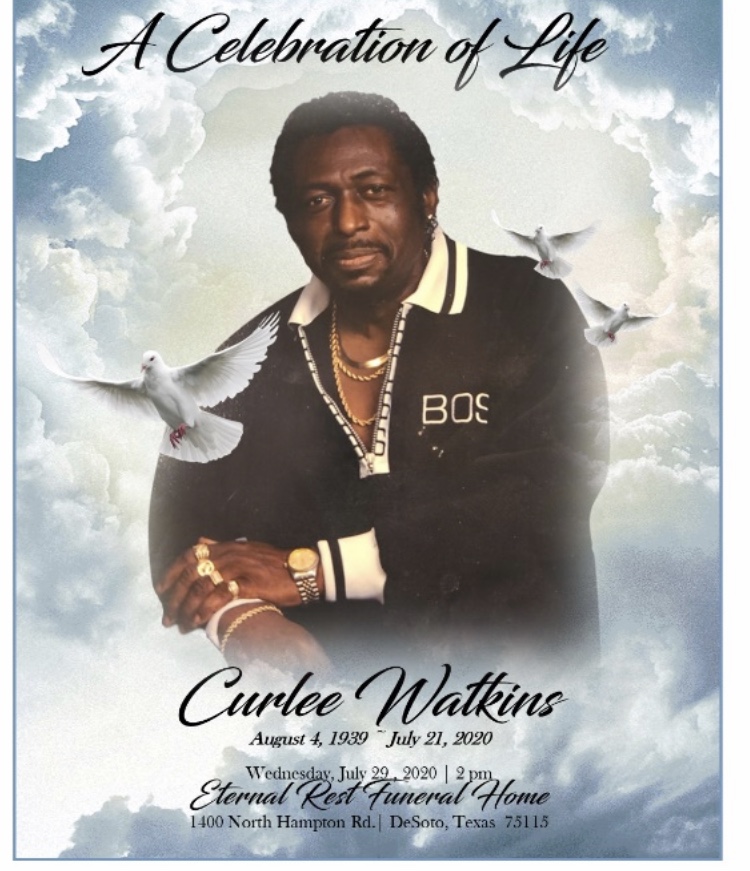 Curlee was welcomed into this world on Friday, August 4, 1939 by Willie & Monie Bell Watkins in Hallsville, TX. He attended church & accepted Christ at New Hope MBC in Gilmer, TX. He spent much of his childhood in Longview, TX. He later moved to Dallas, TX where he attended Lincoln H.S., worked in his mother’s café; The Trade Wind, and opened several gaming rooms. Later in life he worked almost 20 years driving trucks for Johns Manville until he was injured and had to retire.

Curlee & his loving wife Odessa Watkins recently celebrated their 58th wedding anniversary. He loved, pampered, and admired his beautiful wife. Their love was unconditional. Not until death, did they part at 11:59 a.m., on Tuesday, July 21, 2020.

Curlee was devoted to and safeguarded his family. He was also there for his friends. Being the generous person that he was, he loved helping others. He loved to give back to his community, Sunny South Dallas. Especially giving huge BBQs and cooking dinners on all holidays. Everything was free and he turned no one away. He loved fishing, hunting, westerns, music, and football.

He was preceded in death by both of his parents, Willie Watkins and Monie Bell Garrett, two granddaughters, LaBrisha Watkins & Cassie Shelby, one son, Curlee Watkins Jr, one daughter-in-law, Pam Watkins, only sister Cora Lee Kindall, and only brother, James Watkins.

To order memorial trees or send flowers to the family in memory of Curlee Watkins, please visit our flower store.